Who the Fork is Peter Frensdorf?

The negotiator that makes you feel you haven't been negotiating

Pleased to meet you, I'm Peter

My whole life as independent businessman has been about negotiating. I started with zero and soon was dealing with some of the largest companies.  Thousands of deals later I wrote down my methods in NegoLogic. I negotiate fluently in English, Dutch and Danish.

My book Negologic changed the Game, stuffed with insights regarding human nature when there is money on the line. And it is yours for just one dollar! Just contact me pay one single dollar, and I will send your e-book. No tricks up my sleeve. 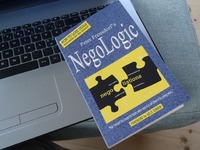 Unfortunately, most men don't care if they are any good at either. If another person would be better, would they allow him/her to proof it? Usually the answer is NO. Regardless if the subject is your wife/girlfriend or a major deal. And that's just a shame, that so many incompetent people assume that whatever they do must be good enough.

Which one of us has no interest in one, two or all three? The good news is, all you need is enough of one, to get the other two!

Lots of money brings you SEX and POWER. Loads of sex appeal brings you POWER and MONEY. And enough power delivers MONEY and SEX to your doorstep.

My article for SKILLS YOU NEED.com:

The greatest wish of every negotiator is knowing the bottom line of the other party, what are they willing to settle for. Not surprisingly, your counterpart attempts to hide this and other weaknesses from you. How successful they are depends on your skills to uncover such secrets. Our own hopes, fears and expectations often mislead us. Take the unbreakable link between outcome and satisfaction. You will be satisfied when you get what you want.

This is a complete illusion. Sure enough, everyone wants to reach a certain result before the start. But the interaction between the two parties soon overrules this aim.

Say you want to sell for 15k and start out with asking me for 18k, including a buffer of three grand. Two different reactions.

The point is that the best result failed to satisfy you, but the worse did. And the link between outcome and satisfaction has been broken.

This was a prime example of how easy it can be for another person to control thoughts into a positive OR negative direction. It also supports the basic principle of Neuroeconomics, the interaction outweighs the result.

NegoLogic introduces: "Story2tell". The order within the decision making process is that the explanation often leads the decision, instead of the other way around. When a decision can go either way the deciding factor is how other people will react when they hear about it.

And their response is pretty reliable.

Example one: You blew it! Perhaps in a polite way, but you'll know just the same. Two: Pretty good deal. You did not get exactly want you wanted but close enough...

Any outcome that makes you look like a loser, you are unlikely to accept.

Once you realize that negotiating is a balancing act there are multiple ways to take advantage. Another common misunderstanding is to show no weakness in your position, no matter what.

Let's try the NegoLogical approach instead. We all know that everything has pros and cons. There is no night without day, no poor without rich, and every coin has two sides. By leaving out an obvious weakness you are setting yourself up for disaster. Because it is only a matter of time before they use it against you. I naturally used this method all the time with great results. Every one of us seeks equalibrium, to explain a decision that seems balanced to others.

You cannot lose what you never had

What happens if you mention your own obvious weakness first? It sounds crazy but this happens to be a trust-building exercise of unparalleled strength. You took the wind out of their sails. But what's more, now you earn the right to be believed when taking advantages elsewhere.

Building bridges at zero cost, because you cannot lose what you never had.

Compare that with the old school method of pushing one-sided issues, no matter how valid. Argumentation often leads to a game of YES NO ping-pong that neither wins. Worse, at one time so much subliminal resistance is created that others will balance AGAINST your words. Into the other direction. In psychology this effect is named polarity response, a very reliable pattern of human behavior. There is much more to these techniques in NegoLogic, but here is a modest start.

Making it easy for others to deal with us. The more important the outcome, the more willing we are to accommodate in timing and effort.

The Bottleneck principle in NegoLogic: close the window of opportunity!

If we could do everything all the time, why would anyone act right now? When leaving your opponent every chance to decide you are also removing the urge for him to do so.

You will come over as willing and available. These signals can be picked up as dangerous signs of weakness and, more often than not, they are!

7/11 stores are always open for when you are hungry or thirsty, so that's your impulse right there - convenience.

Negotiating means you must make use of every advantage there is and create some more. Giving our opponent a limited chance to deal is a strong weapon, all too often neglected. Reading others: the more willing to invest time and effort pre-negotiation, the more eager they are to deal with you.

After writing NegoLogic, I have been busy training companies & teaching negotiation and communication at Business Schools and Universities. 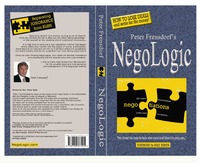 Conduct actual negotiations, as well as coaching you from the sidelines on every step. That is because I enjoy negotiating instead of just teaching, training and preaching. And thanks to my negotiations skills, I have reached the stage that I can do what I want.

Give lectures at Universities and Business Schools anymore.

Why? I flew back from Vilius Lituania after a two day course together with Keld Jensen. I was tired and quiet because the MBA training had shown that afterwards the participants had become worse- instead of better than before. The stream of information we presented in the last sixteen hours had confused them wildly.

At that moment I decided I had seen enough. At universities youngsters sitting behind their lightened Apple logo's trying to make sense of valuable insights coming from practice. Very few participants had gained anything at all.

One of my first trainings was for Mærsk' team of negotiators. I still have their flattering reviews. One of the youngest participants made more impression on me than all positivity combined. He said that the method reminded him of a use car salesman. Okay, I suppose that he has change his mind after the acknowledgements of Professors Olivier Faure, Paul Meerts, Keld Jensen, Ruedi Käch, Verner Worm and so many others. But his reaction is typical for know-it-all negotiator. They are not willing to learn anything new. And that is really good news for the rest of us.

What is important about new knowledge...

Not just to use, but also that you know when someone uses it against you.

Everything you do - or don't sends a subliminal signal. Not wearing a tie means that you are relaxed about events, moreover, the people you meet. It is important not to under- or overdress. Don't arrive too late, or too early.

It all starts with recognising Human Predictability and the Decision Making Process as part of Practical Business Psychology. People assume that they are so unique but nothing is farther from the truth.

When I ask during training: "raise your hand if you are an individual", almost all hands are in the air. All except one. And that person happens to be the only true individual.

Negotiations can be like playing cards, say poker. A lousy player is called a fish. The saying goes that every player must be able to recognise who is the fish at every table.

Joe says this is nonsense, because he cannot recognise any fish. All that means that Joe IS the fish.

Taking the ego out nEGOtiations. We all think we can negotiate naturally. That can be a very costly mistake. If you don't learn to contemplate and weighing all the options, you won't stand a chance against a NegoLogical negotiator. And you will not even realize how much money you left on the negotiation table!